Angie Debo (1890-1988) was a child when her parents moved to Marshall, Oklahoma Territory in 1899, ten years after the land was opened by the "Run of 1889." She saw a rough frontier evolve into an active vigorous state and remembered well what she observed. Debo was a lady with strong beliefs who followed her convictions, which led her to write about the history of Oklahoma, of Marshall, and of American Indians and the relations between them and the federal government.

Debo's research projects were numerous. Paramount among them was the research in preparation for publication of "And Still the Waters Run," which exposed the injustices suffered by the Five Civilized Tribes at the hands of the federal and state officials. This book and her "The Road to Disappearance: A History of the Creek Indians" served as a basis for a landmark U.S. Supreme Court decision, Harjo v. Kleppe, in which important land rights for the Creek nation were recognized.

Debo was sincere about being factual. She made notes in her books and journals, and worked with her publishers to incorporate corrections into subsequent printings of her books. In her 85th year Debo finished writing Geronimo, her last book. During her career she wrote nine books about history, especially that of Oklahoma and Native Americans, co-authored another, and edited three more. Through the years she also made speeches on a variety of topics and contributed numerous articles and reviews to newspapers, dictionaries, encyclopedias, and periodicals.

In her later years Debo traveled widely to speak and to meet people of other countries. Very concerned about civil rights, she was active in the American Civil Liberties Union and its Oklahoma chapter and was directly involved in lobbying congress to obtain water rights for the Pima and Havasupai Indians in Arizona and land for the Alaska Natives. 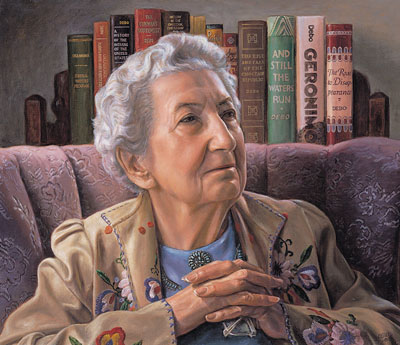 Debo received numerous honors and awards. Among them was what she called her "public hanging," the dedication of her portrait which hangs in the rotunda of the Oklahoma State Capitol. She was the subject of an oral history project from 1981 to 1985 and of a PBS television documentary in 1988 entitled Indians, Outlaws, and Angie Debo which aired as part of the American Experience Series.

Debo received the American Historical Association's Award for Scholarly Distinction in 1987. It was presented to her by Governor Henry L. Bellmon in a special ceremony in January 1988 in Marshall, OK. where she lived until her death on February 21, 1988.

She bequeathed her papers, books, and literary rights to Oklahoma State University, "with the sincere wish that anything which proves worth keeping in this bequest will be of use to future students of the University."