Lindsey Myers was selected as a 2021-22 OpenOKState Graduate Student Fellow. Lindsey holds a Masters in Public Administration and is a PhD student in Social Foundations of Education. In addition to her work as a Graduate Teaching Assistant, Lindsey serves as a graduate student representative on the OSU OER Advisory Group. As part of her OpenOKState Fellowship, Lindsey received a grant to participate in the 2021 Open Education Network Summit and Institute. Her post-conference reflection is below.

Although OEN sessions tended to be targeted toward libraries and faculty, it was a great opportunity to see what is possible in the world of open educational resources. I was most excited about the sessions that emphasized collaborative community approaches, where various university departments work together to make OED adoption possible. I learned about tools like the Open Pedagogy Network, where faculty share their class projects for others to duplicate in their own classrooms, and Pressbooks, an open publisher.

I also had an idea– in order to incentivize faculty to use OER and to help students locate classes that are using OER, I wonder if courses can have something in Banner that signifies the use of OER for that course. That means students will know at the time of enrollment that they will not have additional textbook costs for that course.

I never gave much thought about the widespread problem with the cost of textbooks until I started a conversation about it. I had viewed textbook costs as inconveniently expensive, but somehow necessary. I often need to prioritize which textbooks to purchase each semester, as I knew I won’t usually be able to afford all of them, especially if the cost is coming out of pocket. After giving a presentation about textbook affordability to the Graduate and Professional Student Government Association at Oklahoma State University in Stillwater, I found that I might not be alone.

My own history with textbook affordability informed my expectations going into the presentation that I gave to the GPSGA. I was expecting, at most, about half of the participants in the survey I gave at the very beginning of my presentation to express that they felt as though textbooks were too expensive for them. To my surprise, 80% of the respondents (out of 60 participants) indicated that the textbooks required for their classes are “too expensive” as compared to “adequately priced” and having “other/no opinions.”

Furthermore, I wasn’t expecting the results of the open-ended question, “what word(s) come to mind when thinking of the cost of your textbooks?” to trend as they did. The largest word in the word cloud that formed from the responses was “expensive” followed by the words “costly,” “unnecessary,” “debt,” and “price.” It was clear from this data that the representatives who participated in the brief survey at the beginning of my presentation felt as though textbook costs were too high, and were not happy with the fact that most textbooks are a “required” expense, much to their disdain. I am left with a new sense of urgency for fighting for textbook affordability as I now realize that I am not in this fight alone. 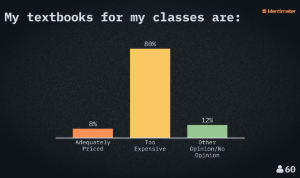 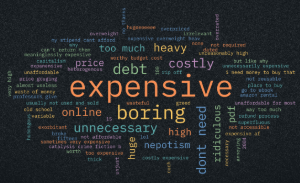 Splattered across Twitter is evidence of the impact commercial textbooks have on our students. Images of tip jars at coffee houses in university towns are labeled “money for books.” Anxious students come by the library, desperate for help determining how to navigate a bewildering list of resources, trying to figure out which parts of the bundled materials they absolutely have to have in order to get through the class. Professors find themselves beginning the term engaging with students regarding textbooks costs rather than subject matter. Grifols Plasma has signs and billboards targeting students -- “Need Books? No Worries. Donate Plasma.”

This is not hyperbole. This is real life.

We are bombarded with news about textbook price inflation. It’s easy to tune out, it’s no longer a surprising data point. Professors find themselves balancing concerns for textbook costs with the affordances of the bundled technology, which simplify attendance and grading. Students leverage every tool in their arsenal to balance paying for necessary course resources and paying for food and shelter.

If Cengage and McGraw Hill merge, an already dysfunctional, damaging system will be controlled by two major players. The companies whose books our students sell plasma to purchase will face even less competition and oversight. Executives with Cengage and McGraw Hill frame the merger as a meeting of equals, which will enable them to create increasingly innovative educational products within “digitally enhanced learning platforms” while reducing costs.

I argue that the track record of these companies does not engender confidence in their stewardship of our students’ future. Hanson, who has been tapped to lead the behemoth publisher, makes much of his personal philosophy to “first do no harm.” The higher education community wants more. The mission and vision of commercial publishers does not align with the values of higher ed institutions. As we continue to find ourselves facing unanticipated risks regarding things such as data privacy, etc., it becomes increasingly important that all those partnering to provide and facilitate educational experiences are operating from the same set of values.

Few educators would include selling plasma as a desirable outcome. 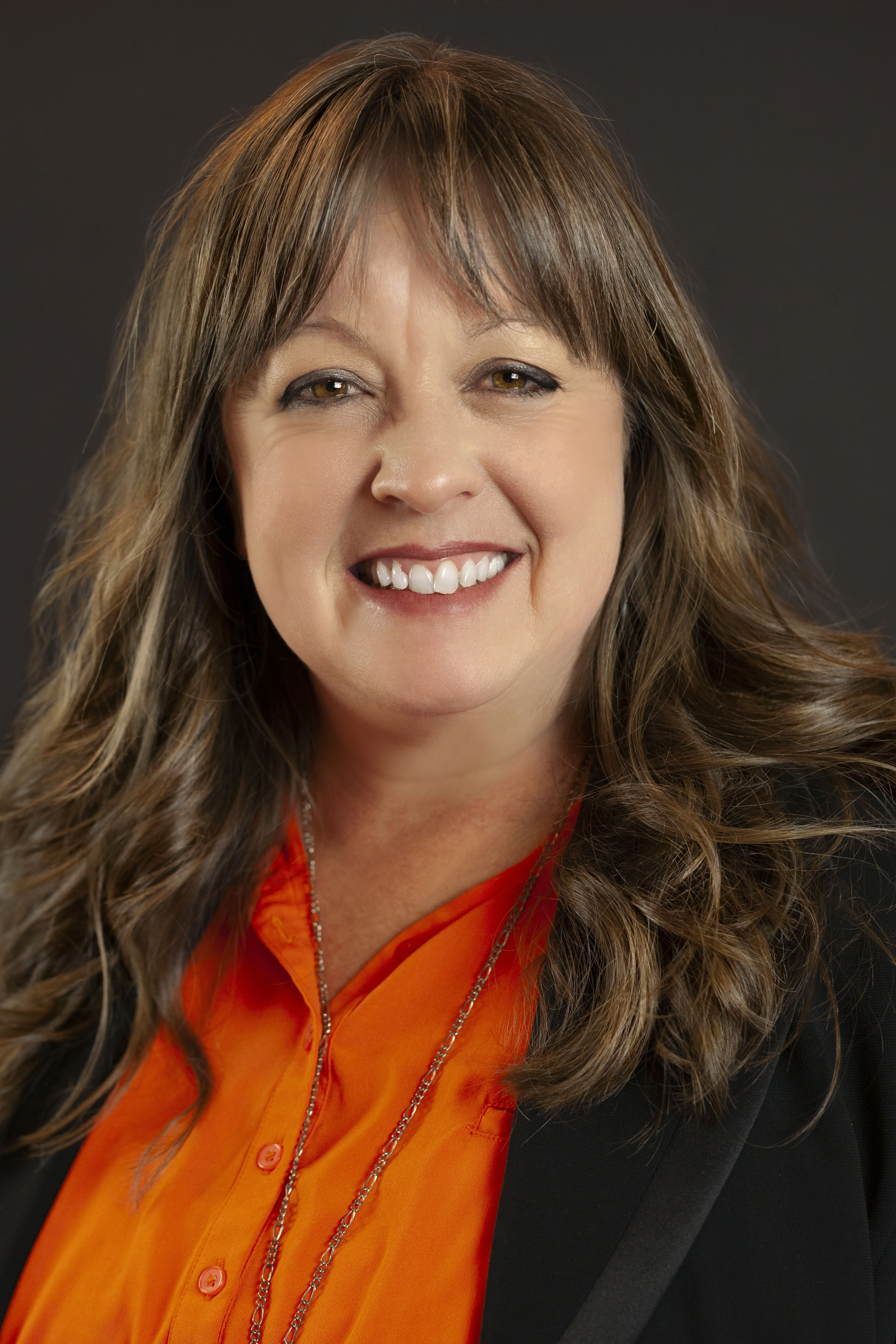